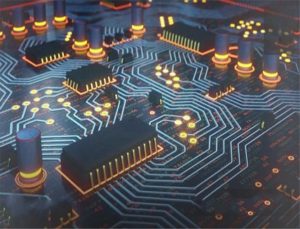 TrendForce’s, a Taipei-based market research firm, has released its latest stats on global top ten IC design companies of 2018, ranked by revenue. Among the top 10 fabless companies, Broadcom has replaced the Qualcomm from the first position to second and NVIDIA secured the third position. Qualcomm revenue dropped by 3.9% due to weak smartphone demand. Media Tek retained its 4th position despite declined smartphone demand, which 0.7% (in USD) in annual revenue according to TrendForce.

AMD which ranked at the fifth position has performed quite excellently in 2018, in terms of growth. The reason behind its performance, according to Chia-Yang, Yao, a senior industry analyst at Trend Force, was its Computing and Graphics products, with a revenue of US$4.13 billion, and a growth of 38.6%.

According to Yao, although Qualcomm’s 2018 product strategy had been rather proactive, its phone chips suffered a drop in shipments and further affected revenue performance, due to Qualcomm’s having lost Apple’s 2018 order for the new LTE Modems and Huawei steadily increasing its proportion of Kirin processors. In contrast, MediaTek kept on adjusting its product portfolio and cost structure, which greatly diminished their revenue decline. 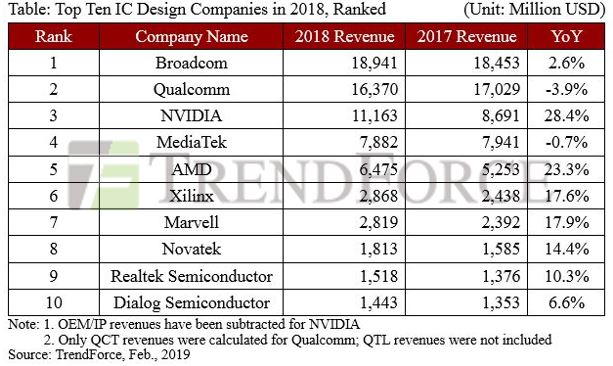 Looking at the overall situation of the top ten IC design companies of 2018, we see that eight enjoyed a positive growth in annual revenue compared to 2017. This was mainly the result of the steady growth momentum in end markets such as telecom infrastructure, data center and TVs; acquisitions served as secondary reasons for the improvement in revenue. Companies that benefitted from market growth momentum include Broadcom, NVIDIA, Advanced Micro Devices (AMD), Xilinx, Novatek and Realtek; those that benefitted from acquisitions include Marvell and Dialog Semiconductor.

However, it must be noted that a large number of companies performed lower than originally predicted by market forecasts in 4Q18, including companies such as NVIDIA, Marvell and Dialog Semiconductor, whose finanical forecasts corrected down. In the case of NVIDIA, at least 50% of its revenue derives from games, but games have slid greatly in revenue last season, causing total revenue performance not to go as others expected in 2018. This also shows that NVIDIA’s gaming graphic card inventory levels have yet to be completely cleared, and will probably still require one or two seasons for clearance and a chance to return to normal operating performances. Nevertheless, it snatched the crown among the top ten IC design companies in growth.

Looking ahead at 2019, Chia-Yang, Yao predicts that the top ten IC design companies will be dragged down by numerous factors, such as the continual decline in smartphone growth, and the fact that 5G or foldable smartphones will merely remain hot-topics, with shipments and penetration rates realized in limited quantities. Huawei is still taking a rather aggressive stance in the smartphone market, which is bound to limit the market performances of other OEMs, and will prove to be disadvantageous to Qualcomm’s and MediaTek’s market performances in 2019.

Growth on the server side is predicted to drop below that of 2018, mainly due to all the big CSP companies’ data centers coming into place, gradually reducing their need for servers. Furthermore, demand in the global car market may become suppressed under Trump’s promotion of protectionist policies and the US-China trade dispute. Thus we hold a comparatively cautious view on the 2019 revenue performance of the top ten IC design companies.